with all things IR35?

For the public sector, IR35 is almost old news, with changes implemented back in 2017. Turn to IR35 in the private sector and there’s a wealth of unanswered questions and confusion. Originally set to come into effect from April 2020, the implementation of IR35 legislation was postponed until 6th April 2021, due to the coronavirus pandemic.

Randstad is here to help and share our experience of carefully navigating the public sector through the IR35 changes in 2017 and preparing private sector clients for initial proposed changes pre April 2020.

IR35 is a set of tax reforms first unveiled in 1999 by the Inland Revenue. The reforms force medium and large businesses in the U.K. to determine if the IR35 rules apply to their contractors and freelancers. Previously this was determined by the contractors themselves.

The new legislation is designed to enable more effective enforcement of existing rules, shifting the compliance burden to clients. For example the change will allow HMRC to pursue one company in respect of 200 contractors, rather than carrying out 200 individual contractor investigations.

IR35 targets individuals that provide their services via an intermediary, most commonly a limited company.

The HMRC has the authority to investigate the tax compliance of organisations, and this will allow them to explore the employment status of any off-payroll workers providing their services to private sector clients.

Where it is found that an individual has been incorrectly categorised as being outside of IR35, the HMRC will issue a determination requiring the unpaid PAYE tax and National Insurance Contribution liabilities — including any late payment fines and interest — to be paid.

In addition to these fines, HMRC have the discretion to issue a penalty ranging from 0-100% of the initial outstanding liability. If an incorrect determination has been made in the absence of reasonable care, it is likely that a severe penalty would be awarded alongside the unpaid taxes.

It is clear that non-compliance with IR35 can bring with it potentially crippling financial implications. It’s critical that you get up-to-speed to avoid any unwanted penalties.

speak to the experts

The affects of IR35 on your business 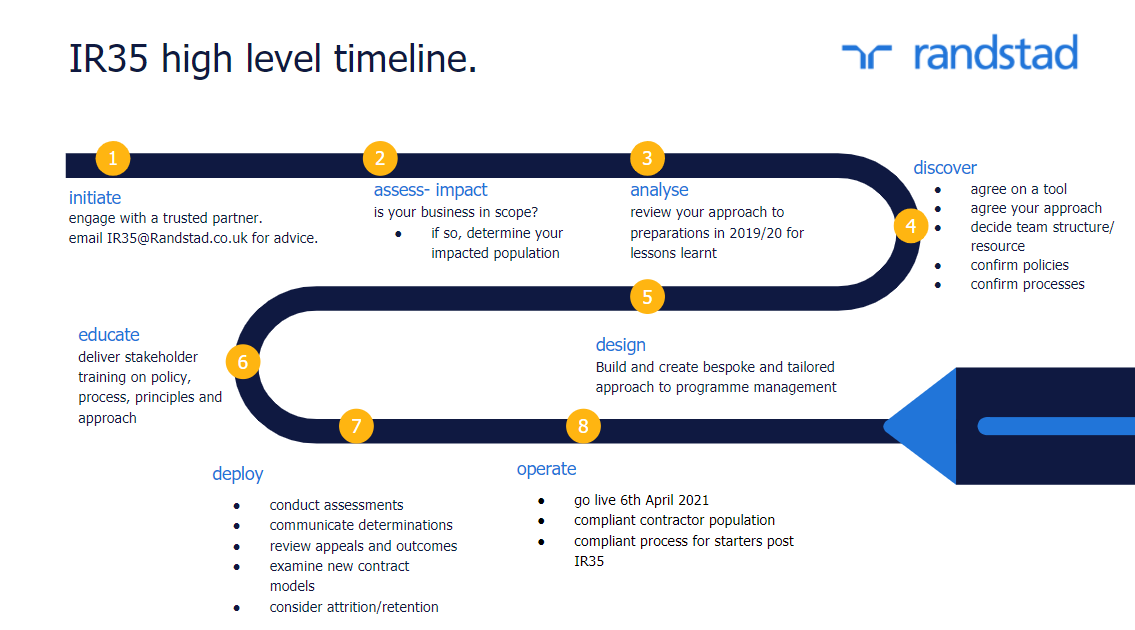 Get in touch with our team

for expert guidance on IR35 changes.

Your business has likely already seen so much disruption in 2020, and IR35 may be an unwanted distraction that you are yet to engage with.

We offer three levels of service:

how can randstad help?

Construction, a historically highly fragmented industry, has relied on subcontracting for decades. We’ve created an easy-to-digest guide to quickly bring you up-to-speed on all of the changes.

get ahead of IR35 and beat talent scarcity.

How will IR35 impact your organisation? Do you have the right processes in place to avoid the potential impact on your flexibility and labour costs?
In this one-hour webinar, you will learn about the impact of IR35 and what you need to do in the upcoming months to mitigate risk and protect your own liability from April 2021.

the road to compliance

Find out how a leading cosmetics brand engaged with Randstad to successfully implement the process of preparing individual assessment and determinations for 200 contractors.

get help with IR35

with a statement of work solution.

Our SoW solution takes the pain away of acquiring skills; from writing the SoW, to delivering the work compliantly and processing invoices and payment, our solution manages this for you so you can worry about the job at hand. We will design a solution that suits your needs, not ours.

for a call back from our IR35 experts.